This purpose of this project was to explore the systems of the United Nations by participating in a Model UN conference regarding a certain topic. We would do the conference twice, each time with a different current issue in our world that we had to find a resolution for. In preparation for the conferences we were each distributed different countries to act as during the conference. I was a Chair, which are the people who oversee the conference and guide it, so I didn't have a country. Once people went in depth about their nation, they studied the issue itself. Our first conference was regarding the current Venezuelan Refugee Crisis, and the next one, in January, will be about Nuclear Proliferation.

Image of Myself During the Conference - 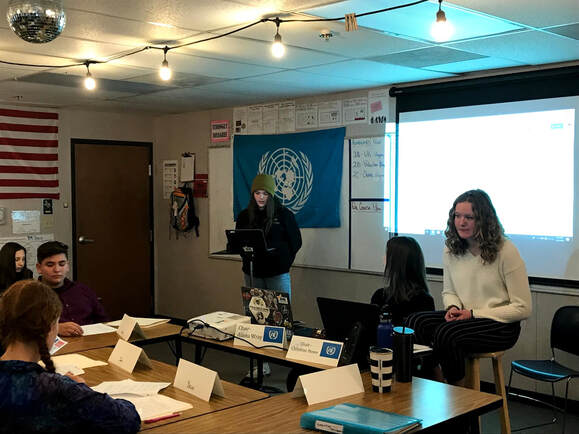 Highlights: What is the best or most interesting part of this project so far?  Why is this particular thing so engaging/interesting for you?
The most interesting thing about this project so far is learning in depth about the issues that the conferences are about. I enjoy learning about them because I feel like I have knowledge about the world that I can apply in conversation, especially with adults. It is also humbling to learn about problems in other places around the world because it makes me grateful for what I have. Another thing that is interesting is learning about the UN process because I like feeling like I know how things work.
​
Growth:  How have you grown over the course of this project (think about habits, skills, knowledge, etc.)?
During this project so far, I think I have grown in my leadership skills. I have seen this mostly in the practice conferences. In the first practice one, I had a hard time being assertive so that I could guide the conference. In the second one it got easier, and by the time we got to the real conference about the issue, I felt really confident. It was easier to talk to the entire class, and easier to guide the conference well.

Conference Preparation: How prepared did you feel for your our first conference, and how did that preparation translate into participation?  Offer specific examples to support your claims.
I felt pretty confident in our first conference. The practice conferences that we did leading up to it were super helpful, and it was good to be able to have those experiences to draw from if sometimes was confusing me. This preparation on both of the chairs parts made it so that neither of us was doing nothing during the conference. We were both engaged and making sure things were going smoothly. We divied up roles for during conference so that we wouldn’t talk over each other or both call on different people at the same time. A couple of times I lost track of comments, but other than that it was smooth and good.

Refinement: What do you plan to do differently in our second MUN conference in January?  Why do you think this will improve your experience and the conference as a whole?
In our next conference, I plan to make our organization a little better. Our script was very organized, but I think it would have been helpful to have each section as a separate packet so that we could easily go back to it if we needed to. That way we could share a script as well.
Also, we will do a better job of organizing and presenting the amendments to the resolutions. We should have them easier to follow for the delegates and in a better format for when we copy them into a document. Maybe we could just have delegates write them on a document and share the document with us? Would that make it easier, or be distracting to have computers?

Teenagers: The Good, the Bad, and the Ugly/Surviving the Teenage Brain 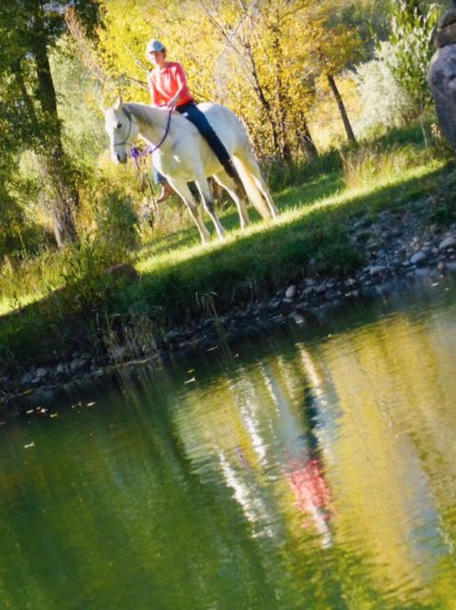 Paragraph 1:
I am most proud of in this project is the portrait that I took of my mother. I discarded the rules of photography on purpose, not using the rule of thirds and putting everything in the middle of the photo. However, I tilted the whole thing so that it was not quite so centered. I thought this attracted attention in a different way. It took me a lot of tries to get a good photo, but once I got one, I was really happy with it. I am also proud of the editing that I did. I think that my photo stood out from the others in the class.

Paragraph 2:
Something that I had difficulty with was being optimistic during this project. Particularly when we were doing the seminar preparation, I had a hard time not being upset with the amount of time that we had to finish it. I was also influenced by my peers annoyance with the assignment, so I let that deter me from doing the work. Eventually, I solved this by persevering through. Even though I was annoyed, I tried not to let the feelings of my friends affect how I did on the assignment and how quality my work was. Eventually I got everything done and was happy with the work that I did, but at the beginning it was hard to stay optimistic about the assignment.

Paragraph 3:
The most important thing that I learned during this project was that time management is very important. I saw this the most through observation of my peers and through my own actions when we were writing our essays and when we were interviewing. When we were deciding who we were going to interview, scheduling times to do that, and writing the questions we would ask them, I feel that I was managing my time really well. By the end of the first class period that we were doing interview related things, I knew who I was going to do, had sent them an email asking if they would be up for it, and had proposed a time and date. I noticed that some of my classmates didn’t get things done as quickly, however, and that caused stress for them and problems later on in the process. When we were writing our essays, I managed my time efficiently as well, but again, I saw some of my peers not doing as well. In some cases, this was because they had not managed their time well during the interview stage. During the reflection process, I didn’t manage my time very well. On Thursday, I was goofing off and only got two paragraphs done in those 2 hours of class time. I was very distractible and was paying attention to things other than my schoolwork. This is an area that I could grow in.

Paragraph 4:
Based on my performance in this class so far, I would give myself a 9. I believe for the most part I am a good student, but there are times when I could improve my behavior. I arrive to class on time, and I am prepared to start with my materials out and my starter book ready. I usually use my class time efficiently, but there are times when I can work on my time management, such as during the reflection of this project (see paragraph above). Two areas where I could use the most improvement are finding a way to be interested in what we are doing, and actively listening to the speaker. Sometimes I do the work just to get it done and get a good grade, not because I am actually intrigued by it. In the future if I can find a way to relate the content or assignment to something I am interested in or find something in particular that I want to know more about, I would be able to be more engaged in class. In terms of being an active listener, I can definitely improve. Sometimes I find it difficult to pay attention to whoever is talking because I am more interested in what my friends are doing or talking about. I need to be able to block out distractions and pay more attention to the speaker.